Spain occupies about four fifths of the Iberian Peninsula, which it shares with Portugal. Its other frontiers are with France and Andorra in the Pyrenees to the northeast – not forgetting with the United Kingdon, in the form of Gibraltar at the extreme southern tip of the mainland!

The Pyrenees form a significant natural barrier for wheeled transport, with major roads and motorways being almost exclusively confined to the extreme ends in the Basque Country and Catalonia. There are many mountain passes, however, and several of these are ideal for bikers as their sinuous and steep nature deters both large vehicles and the majority of holiday traffic – some of the passes are themselves among of the best riding routes in Europe! 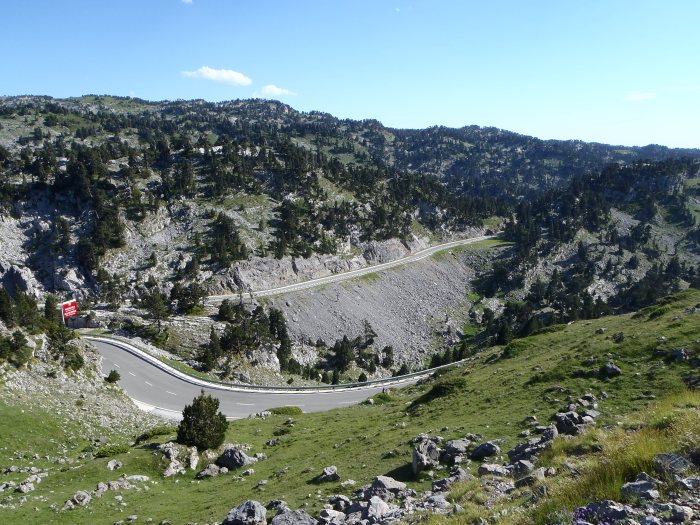 All of the country is high and mountainous, but there are some important ranges which should be considered ‘strategic’; the Cordillera Cantabrica, which includes the Picos de Europa, runs along the north coast, and the central ranges, called the Sistema  Iberico and Sistema Central. The latter includes the Sierra de Guadarama which together with the Sierra Morena surround Madrid, the capital, to its north and south.

The Beatic ranges and smaller sierra to the north effectively isolate the Mediterranean littoral from the central plateau. Four river systems also affect the distribution of roads and population: the Duero and Tagus, whose beautiful valleys provide a natural, if vinous, access to Portugal from the Sistema Central, the Guadalquivir which flows south-west into the Atlantic, and most importantly Spain’s longest river**, the Ebro, which rises in the Picos de Europa and flows in an arc south-east along the line of the Pyrenees before finally draining into the Mediterranean between Barcelona and Valencia. The central part of the Ebro basin, called Los Monegros, has extremes of climate, including prolonged periods of very high winds. Although it is not technically a desert, in some respects it is just as much a natural barrier as the Pyrenees; with careful planning crossing Los Monegros can be a highly rewarding experience.

The other major feature of Spain’s topography is the high plateau called the Meseta, coming from the Spanish word ‘mesa‘ or table, which is shown in light brown on the map. This is the most ancient landscape in the Peninsula with an average altitude of over 600 metres it is high, bleak in winter and sweltering in summer and contains some of the archetypal landscapes in Spain, personified by the famous travels of Don Quixote de la Mancha … 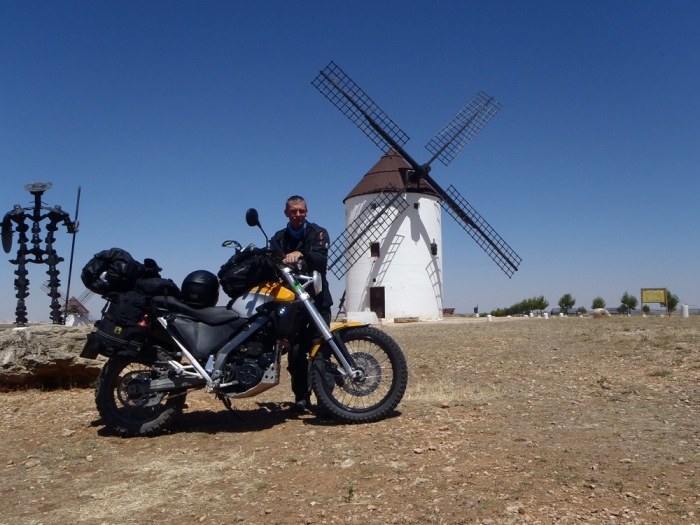 Population centres are concentrated along the coastal regions, especially the Mediterranean, which has suffered serious overdevelopment for almost all of its length. The interior is rural, with depopulation still being a serious economic and social problem. There are only two large cities in the interior, Madrid, roughly at the very centre of the Peninsula, and Zaragoza, Spain’s third city, which is located in the middle of the Ebro depression. Otherwise the inland cities are small and historic, almost all worth visiting and some are highly recommended. Madrid and its satellites are a serious barrier for the motorcyclist and although Zaragoza is relatively compact its ring road system is the hub of a massive logistics sector so both cities are best avoided.

Travel plans to the west and south of the country should take three factors into consideration: enter Spain via the central region of the Pyrenees, cross the Ebro basin and the central Meseta well away from Zaragoza and Madrid, and avoid riding down the Mediterranean coast. Following these guidelines takes the rider away from the conurbations and the very modern road network that connects them, leaving a huge territory which is largely empty – but for the hundreds of  small towns and villages, and the thousands of delightful rural roads that serve them!

** The Tagus is slightly longer but as it flows into Portugal that doesn’t count!

Get it from the ‘Experts’